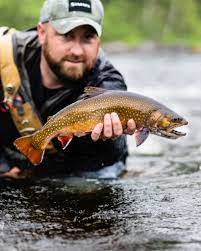 Our third featured guest is Outdoor Writer Jerrod Vila. Jerrod has been an avid outdoorsman his entire life, stemming from catching tiny brook trout in Adirondack mountain streams while camping with his family growing up. In 2009, he and a couple of friends with similar passions began “Downwind Outdoors” which has now grown to the #1 eastern coyote hunting channel on YouTube with well over 10 million views. This adventure led him into filming for the Pursuit Channel with the still running show “Live The Wildlife TV with Gus Congemi.”

Writing Blogs and reviews for www.beyondthecrosshairs.com and www.downwindoutdoors.com led him to find a real aspiration in outdoor writing and he became of member of New York State Outdoor Writers Association (NYSOWA). He currently writes an outdoor sports column for the Amsterdam Recorder, Adirondack Express, Hamilton County Express, and Fulton County Express. Jerrod is also the flyfishing editor of “The Angler Magazine Upstate New York Edition” and has written national articles for “Coastal Angler Magazine.” A serious passion for fly fishing has led him on adventures in Colorado, Maine and Ontario to chase native trout.

In addition, he is an accomplished bowhunter and can be found hanging around in a tree stand when not waist deep in a stream or setup on a snow laden hedgerow calling elusive predators. Jerrod will be at our show, greeting readers and talking about Outdoor Hunting & Fishing pursuits